Allen Matthews – A great talent not many knew about


The first time I met Allen was at the Caffè Degli Artisti in Cortona. I was having a cup of coffee with a friend of mine and few other people. As they knew I had just finished my studies in photography, they started talking about this American photographer that had been hanging around for quite a few years.  Everybody knew him, but there was a kind of fascinating mystery around him.  “He’s a character. He’s been living here for long time but doesn’t speak a single word of Italian. You should really meet him, he’ll be happy to speak with you.” Everybody said something about Allen, but nobody really knew him very well.
While our talking was going on a solitary man passed by us, almost unnoticed, and slowly moved to the bar counter with his Leica hanging from his neck .

Some images from the Railroad series, which launched Allen in the advertising world

I knew afterword that Allen used to be a very well established commercial photographer in Atlanta, working for brands like Nike or Coca Cola. He had been travelling the world on assignment  with a team  of assistants. “But I realized I didn’t like the advertising world, it was fake! I wanted to photograph real people.” That’s why Allen abandoned his previous life and moved to Cortona, where he established a photography school: the Cortona Center of Photography.

Pictures from the series White on White

We quickly became friends and eventually I taught some of his workshops with him . I saw him as a mentor, as a source of inspiration. I lived in Rome from 2006 to 2011 and every time I went back to Tuscany I always managed to find some spare time to go and visit him.

His house was small. Maybe not that small if empty, but very small after he filled it up with all the photography equipment he had. The kitchen was filled with developing tanks, reels, thermometers, scissors. Under the sink there were chemical powders, developers, fixers. Films in the fridge. A central long table in the living room with two desktops and printers, scanners and monitors. Pictures and proof prints were scattered all around the place. There wasn’t a square inch available to put a plate out for lunch. And nobody could touch his stuff. Signs of Do not touch! Or  Keep Away were systematically located on piles of films around the house.

Some pictures from Allen's latest work on Cortona


It was fascinating to listen to him talking about his photographs, the way he had taken them, the stories behind them. He would spend hours telling you funny things about his pictures.

Allen left us on January 22nd this year, at the age of 76. He will always be remembered by his friends as a great person and as a  great photographer who spent his entire life following his passion. Some of his photographs from Italy will be exhibited in this year edition of Cortona On The Move. 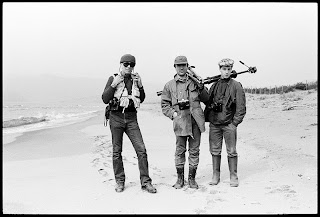 On the left is Allen in Portofino


All the pictures in this post are courtesy of Robin Davis